Parachute camping hammock has gained an occult following of passionate fans, especially campers. On the other hand, the use of hammock by regular folks is also gaining popularity. These are the people who had apparently gotten so many benefits from sleeping on it.

When you’re talking about sleeping in a hammock, forget the rope and knots. The rope hammock is possibly the most uncomfortable thing you could spend some time in, much less a night-long sleep.

Moreover, the spreader bars used in most backyard hammocks make it unstable and plain unsuitable for sleeping. This is one of the most common instances of incorrect use of the spreader bars.

Parachute hammock is undoubtedly the most well-known hammock when it comes to outdoor activities. These hammocks made of parachute nylon are very comfortable compared to the rope hammocks.

A study shows that you fall asleep faster, better in a hammock 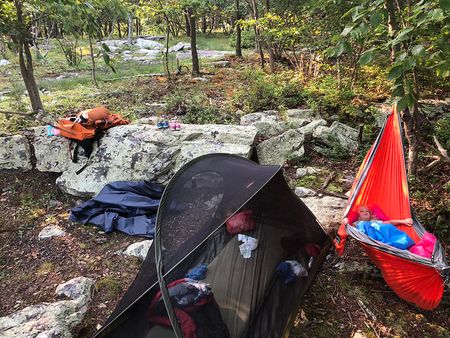 Sleeping in a parachute camping hammock compared to sleeping on the ground. The rocking motion of sleeping in a hammock is helpful to calm people down and help them sleep faster. Research studying the activities of brain waves related to sleep appeared to increase because of the gentle rocking.

This research uses beds that are designed to rock gently as a hammock would. Moreover, the study has detected a state of a deeper sleep for people sleeping in a hammock or in a hammock-like bed. This is detected through the brain activities of the test subjects.

There is a change in brain activities when sleeping in it

This brain activity has been linked with the rocking motion generated by the hammock. Sleeping in a hammock has been shown to help manage insomnia and various difficulties of sleeping.

A study of the effect of sleeping in a hammock shows a significant increase in the average people’s sleeping quality. The participants of the study also admitted that their experience in sleeping with the gentle rocking—much like hammock—is more pleasant compared to the regular bed.

Sleeping in a hammock with a good design that allows for a deep, good night’s sleep, made all the difference.

As we have established that sleeping on a rope hammock is out of the questions, a parachute nylon hammock is your best bet, especially when you’re just getting started. The parachute hammock is great for those who had just gotten started on their hammocking journey.

People around the world sleep in a hammock every night

Hammocks have been a part of many culture’s ways of life. Hammocks are definitely not a modern invention. Even until now, the existence of hammock is an intimate part of many native people’s everyday lives.